First,  Roberto Aguirre-Sacasa possesses stunning talent. I discovered him via his eerie, wicked, and delightfully twisted Sabrina comics. I devoured the available digital episodes and keep watching for more. I need more.

Finding Riverdale on Netflix led to staying up till 5am binge-watching most of the first season. I don’t stay up all night often, but I couldn’t stop. Be warned, the show is that good, and that addictive. 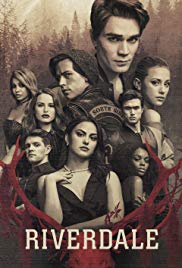 verse, hot cast with a delicious mix of retro small town, an updated gritty vibe, and loads of secrets radiating from a shocking crime.

It’s Archie comics go Gothic. The show captures a lot of the visual aspects and high school issues of the original comic books, and brings the whole gang into the present. Age gap relationships, interracial dating (without making it a big deal, love it), accusations of forbidden love, dirty dealings, a dangerous gang of bad boys, older bikers, a few true creeps, girl power, women in strong roles–including the mayor, Josie and the Pussycats, and Veronica’s mother. Class and race issues affect the dynamics in the town and are handled well, fitting the new Riverdale world and the high entertainment value of the series.

It’s high school, all grown up. Riverdale got to me so good, I’m already planning to watch all of it again.

I enjoyed the addition to the gang, Betty’s gay friend. The gay sidekick has become a cliche, yet it works here. At a time when we’re seeing an erosion of rights in the US, the inclusion of gay and lesbian characters matter. LGBTQI and so on youth have a drastically higher suicide rate than straight cis-gendered students. People perceived as outsiders continue to experience bullying, violence, sexual assault, harassment, bigotry, and marginalization. Representation that values a wider range of people than those traditionally considered worthy can make a difference in the self-esteem of viewers–and foster better attitudes by breaking dehumanizing stereotypes.

Also, it has to be said, Archie has abs.

I know what I’m doing tonight.

Follow me to be the first to know when my new high-heat romantic suspense, Stranded, goes live. My Star Skull duet gives you a relic quest, a spirited curvy archaeology grad student in peril, and a secretive hot-as-hell pilot. Join the adventure on a remote Caribbean island with armed bad guys in pursuit. Episode 2, Captured, releases in a few days. It’s available for preorder on Amazon. This New Adult younger woman / older man duet is for readers 18+ due to detailed intimate scenes, dark rituals, language, and violence.

BTW, Riverdale is available on DVD and on the CW.

QZ at QZayneBooks.com
Replace 'at' with the @ symbol and write "ARC TEAM" as the subject line.

©Hughes Empire and Q. Zayne Books, 2016. Unauthorized use and/or duplication of this material without express and written permission from this site’s author is strictly prohibited. Brief excerpts of not more than 50 words may be used in a review, provided that full and clear credit is given to Q. Zayne and Q. Zayne Books with a link to the original content.
All of our posts and books are DCMA protected.

Sign up for the Q. Zayne private newsletter to get free books and release news

#mc_embed_signup{background:#fff; clear:left; font:14px Helvetica,Arial,sans-serif; } /* Add your own MailChimp form style overrides in your site stylesheet or in this style block. We recommend moving this block and the preceding CSS link to the HEAD of your HTML file. */